In addition to Bob Klein’s dedication to affordable housing, a cause to which he’s been committed for more than three decades, Bob is also committed to advancing medical research. This commitment originated when his younger son Jordan was diagnosed with Juvenile Diabetes in 2001. A year later, his mother was diagnosed with Alzheimer’s.

Stand Up To Cancer (SU2C) 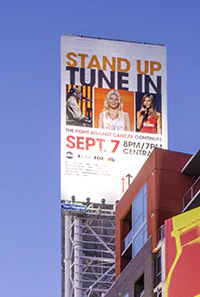